You Have Been Given Dominion Over All Things - How Are You Wielding It?

We've all heard it at one time or another but do you really believe it?

If we are only limited by our imagination and Imagination is more important than knowledge, why has it been so difficult for the collective to see a way to cooperation & better communication in creating Peace?

Why is it so hard to see what's possible?

Maybe because you can't solve a problem with the same Mind that created it.

http://mypeace.tv/video/cigna-we-love-you-to-death Having met one a Cigna Executive Chris Curan face to face with 30 Sunrise Deputies standing behind him Just afew days ago I can personally say that …

http://mypeace.tv/video/cigna-we-love-you-to-death
Having met one a Cigna Executive Chris Curan face to face with 30 Sunrise Deputies standing behind him Just afew days ago I can personally say that CIgna has chosen a spokesman who can spin lies as well as anyone in the Insurance industry. I am grateful the Wendal Potter former CIGNA chief executive is now a whistleblower!…
Continue

The Journeyride Project
The journey beings November 16, 2009
Statement of Purpose

If actions speak louder than words then a three thousand mile bicycling journey across the United States is sure to be a message heard from Massachusetts to California. The purpose of the ride is to connect with people across the country, bringing society closer together as a community, creating a solution to end homelessness and hunger, and leading the world into a new era.

A FILM TO SEE: "The Shift" Featuring Dr. Wayne Dyer

Today I'm happy to recommend another inspiring film. Over the years there have been
certain authors who have greatly inspired me to evolve into a better person, and one
of those authors is Dr. Wayne Dyer. Thankfully, I'm now able to help spread the word
about "The Shift", a wonderfully uplifting film featuring Wayne and his wisdom about
connecting more deeply with your life's purpose. By signing up to try the Spiritual Cinema
Circle (a DVD… Continue

Is There Proof That God Exists?

The question was raised by a member of Global One TV as to whether or not God exists. Rarely is the question heard however, "How do I know that I exist?"

One's own existence seems self-evident. And yet there really isn't any proof - not objective proof anyway. And if you try to prove your existence to others it raises the question of… Continue

Love, Peace, Compassion, Unity, Music, Rhythm, Meditation. and comunication these are the values I pursue in my life:)
GOD is Energy

It is only bodies that keep us believing we are separate. When the body becomes a little pile of dirt, then we see that there are no others....the others are you! That is why it is said, "The gifts you give, you also receive." ONENESS AND PEACE.

If you give yourself to love one hundred percent you cannot know what the outcome will be.

Giving yourself to love is laying yourself bare without knowing how you will be used; knowing that however you are used, you are given to love, in service to love. Whatever your mistakes may be, however you fumble, however you stumble, if it is in service to love it teaches you something. You pick up and you serve love even more strongly. You marry love, and you say, "I am yours." Then whatever beautiful temptations go by, you say, "I am taken. I have given myself to love."

The Journeyride Project: An Inside Look

As of this writing I am twenty-six years old and have only finished two years of college, having left conventional studies in 2003. Contemporary sociological conventions in North American society dictate that the logical thing now is to go back to University in pursuit of a “real” job. Yet I hold that what is true for one is not… Continue

The Search for John Lennon

Like so many others in our world, I would love to see our humanity supercede our society. Every individual knows that getting along is the easiest way to prosperity, but somehow this simple ideology is lost when applied to the masses. I agree with Churchill that "democracy is the worst form of goverment, except for everything else that's been tried." Democracy has its flaws to be certain. Just looking at the current state of our country and the trials and tribulations we're enduring prove that… Continue

You may have recently seen this wonderful picture of one of the largest Human Peace signs ever organized... 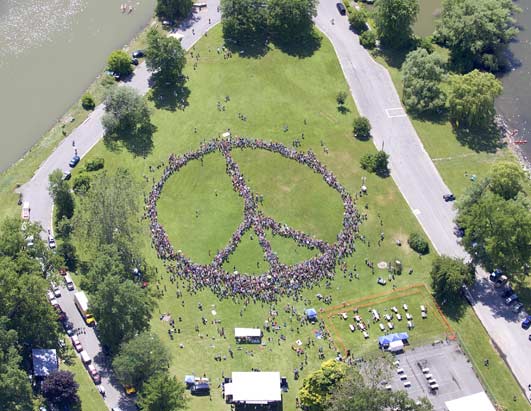 The picture is from Stewart park in Ithaca NY on June 22, 2008. Almost 6000 people gathered to make this incredible visual example of Peace possible. Aside from being a social networking site for us to Unify and make the World a better place, MyPeace.TV is an evolving visual example of People Co-Creating Peace through Media.…

Who Are The Global Village Women?

ARTIST’S STATEMENT –WHO ARE THE GLOBAL VILLAGE WOMEN?
The Global Village Women promote random acts of kindness. The purpose is to show appreciation, which creates a chain reaction of active demonstration of more love and more kindness in the world. Resulting in revealing the hidden door to our positive nature.
Our world is shifting back to a place where we are “one”. Frequencies are rising. Automatically, many people are choosing to end dead-end relationships and surrounding… Continue

What Happens When I Die?

A new member of Global One TV posted a blog yesterday posing this question. What follows is a train of thoughts expressed in words in response to the integrity of that question...

In order to answer the question, "What happens when I die?" I feel it is important to take a look at something a bit less speculative and that is the… Continue • Nearly 45,000 people die in the US each year because they lack health insurance and cannot get quality care. That equals out to roughly… Continue

Wake Up Warriors - Take Your Power Back!

Take Your Power Back Warriors!
Humanity is at the most important time in the history of the planet. We are in the middle of the greatest paradigm shift the world has ever known, where we have a choice - to keep fear, limitation, suffering as our way of life or to choose a much higher philosophy - that of love, compassion, open-mindness and exploration. We can create miracles when we come together.

Grassroots action and inner love will allow a global… Continue

Added by Digital Publishing Entertainment on October 16, 2009 at 4:18pm — No Comments

Starman Invites All To Be A Part Of The Experiencers Collective 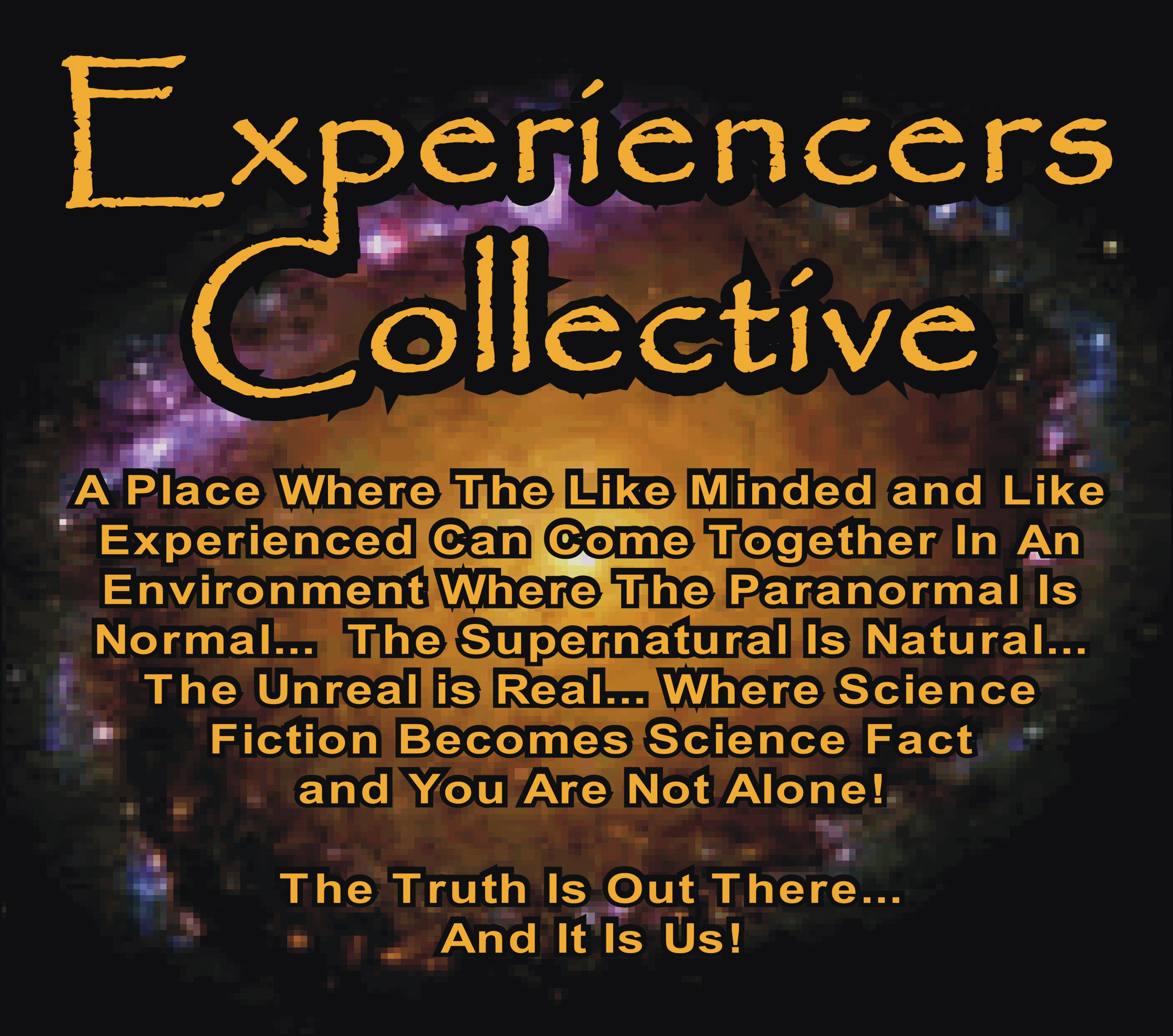 Added by Digital Publishing Entertainment on October 16, 2009 at 4:11pm — No Comments

I AM the Resurrection

Jesus the Christ did not have a website. And if he did, Judas probably would have hacked it. Later on, the Christian church would have taken it over and rewritten all the code entirely.

To the best of our knowledge, Jesus did not write a book, nor was he promoting a set of tapes, DVDs or CDs. Jesus was never on Oprah.

So since he left no writing behind,… Continue

i love the human peace sign photo.
It is amazing how icons can hold so much meaning.

Life is a beautiful interplay of imagination and manifestation. Known in other ways as feeling and thought, feminine and masculine, yin yang, each requires and adds to the other. In an amazing dance that allows us to create and recreate our world, these energies continuously merge into each other to form a union that brings wholeness to our expression. Inspiration held with determination is what creates our physical experience and when this process is conscious and balanced, great… Continue

At the end of the last session of a two week seminar led by intellectuals and experts in their fields, Dr. Papaderos rose from his chair at the back of the room and walked to the front, where he stood in the bright sunlight of an open window and looked out.
He turned. And made the ritual gesture: "Are there any questions?"
Quiet quilted the room. These two weeks had generated enough questions for a lifetime, but for now there was only silence.
"No questions?" Papaderos swept the… Continue