During a surgical procedure, I died for awhile, went through the light and met you-know-who.

God greeted me at the Pearly Gates. "Are you hungry," he asked?

God opened a can of tuna, unwrapped a loaf of white bread, and we began to share it. While eating the humble sandwich, I looked down into Hell and saw the inhabitants devouring huge lobsters, vegetables, fresh breads, desserts. Curious, but deeply trusting, I remained quiet.

The next day, God invited me to join him for a meal. Again, it was tuna on white. Once again, I could see the denizens of Hell enjoying salmon, rice, veggies, apple pie. Still, I said nothing.

The following day, mealtime arrived and another can of tuna was opened. I couldn't contain myself any longer. Meekly, I asked, "God, I am grateful to be in heaven with you as a reward for the pious, obedient, devotional life I led. But here in heaven, all I get is tuna on white bread, and in the other place they eat like emperors and kings! I just don't understand it."

God looked at me and sighed: "Let's be honest. For two people, it just doesn't pay to cook." 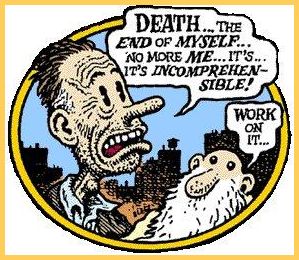 When I heard that joke it reminded me of something that happened when I was about nine years old. I was attending religious classes (I won't say which denomination. Not trying to pick on anyone, only the concepts). I'd been told one day that anyone who hadn't accepted my faith would burn in hell. Literally.

I immediately thought about my poor old dad. He allowed all seven of us kids to be raised in my mother's faith, but he, himself, was not a true believer.

Horrified about this news of his eternal fate, I went to the woman who was teaching, after class ended, and asked her, "Are you sure about this?" I told her about my father.

Pretty awful memory. Can you imagine the stuff we tell kids in God's name? Sure you can. It's a topic of endless conversation and in most cases, we're shocked at what other religions tell their young, but rarely mortified by our own beliefs cause "ours are the right ones."

I went home that day and found my barrell chested 6' tall father taking a nap on his bed. I crept in quietly with a bit of water. I had been instructed in class to perform a particular ritual. The deal was to use it only on someone near death if they were not of my faith. With my dad, I figured why wait? I was now, in fact, a real live bonafide savior, all 50 pounds of me. I leaned over his snoring body and sprinkled some of the holy liquid onto his forehead.

Up he sprang, startled, of course.

"What the hell are you doing?" he hollered, as my little legs flew out from under me, scrambling out of the room.

We never again spoke about it.

When he was in a hospital dying, many, many years later, my mother called the cleric of her local church. She wanted to give my dad one more chance to come to what she very sincerely believed would take him to his final salvation.

The man from the church came over. (again, no labels here as I'm not singling out any particular religion) He went alone into the room with my father and spent over an hour. When he emerged smiling he said to my mom, "Your husband is fine. He doesn't need me. I learned a lot just listening to him."

My mother felt the truth in those infinitely comforting words. She held her husband's hands the next day, speaking in his ear as he peacefully slipped out of that big strong body of his. She told me later she thought she may have gone with him part of the way. She said she saw angels. I believe her.

All I know is when I got there, my father was gone and the look on his face was that of a sleeping child. No lines, no creases, no pain, no worry. Wherever he went was fine indeed.

I guess my water trick worked after all.