Why defending our Constitution does matter 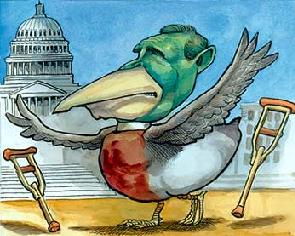 Wow! Has any lame-duck president become irrelevant as quickly as George Bush? I'm not sure I can remember one in my time. Nope. Not even the much-hated-by-the-right William Jefferson Clinton was this irrelevant. It's amazing. People are looking right past George W. Bush and into the brighter future promised by president-elect Barack Obama. Publishing houses are suggesting Bush wait to write his memoirs (or maybe skip them altogether). Bush didn't spend much time campaigning on McCain's behalf, and he wasn't even physically present at the Republican Convention. On Bush's last trip to Iraq, a journalist even hurled his boots at him. Hell, the president-elect has already told the world that it's highly unlikely that he'll investigate the Bush administration after it's over. People simply don't want to deal with George Bush anymore. They just want it to be over, the end of a bad chapter in American history. Once again we've given George Bush exactly what he wants: The green light to wreak as much havoc as possible between now and January 20, 2009 and go unpunished.

While everybody is (understandably) looking toward the future, our president is very busy in the present. He's like the Energizer Bunny, bailing out every financial and lending institution that comes begging on the doorstep of 1600 Pennsylvania Avenue, relaxing environmental protections left and right in the name of making business easier to conduct. Why, it's important in these tough economic times to help businesses create jobs. Sometimes you just have to eliminate the roadblocks and the red tape. That's George Bush's justification for what he's doing. Twisted, of course, just like the rest of his justifications have been over the years, but it seems to work for him. The liberal media is upset with president-elect Obama for writing off any talk of going after the Bush administration, but I say it's time to lay the blame where it belongs. The reason George Bush is still around to create havoc is because the present inhabitants of Capitol Hill – with two notable exceptions -- have failed to do their jobs. George Bush should have been made to answer for his transgressions a long time ago.

It's understandable why Barack Obama is reluctant to go after the previous administration. Let's face it, the American people have overwhelmingly elected Barack Obama because they believe that he can move America forward. Barack Obama is charged with changing the course of the country and uniting its inhabitants, and he has to start working on that the day he takes office. However, it would behoove our do-nothing Congress to advance an investigation of the Bush administration before the changing of the guard. Why? Because our elected officials have taken an oath to preserve, protect and defend the US Constitution and they should take the job to heart. Both Nancy Pelosi and Harry Reid have certainly failed to uphold their oaths of office. This is tough for a Democrat like myself to admit – especially since I had such high hopes for Nancy Pelosi as the first female Speaker of the House – but it's absolutely true. These two have been the most ineffectual Democratic leadership we've had in a very long time.

To the conservative defenders of Mr. Bush, I've got news for you. George W. Bush has committed impeachable offenses. Only one is needed to begin proceedings. You can take your choice, but we've got two winners in the false justification for the Iraq invasion, and the torture of prisoners from the wars in Iraq and Afghanistan. It is no secret that George W. Bush invaded a sovereign nation under false pretenses. Bush, Vice President Dick Cheney, Donald Rumsfeld, and even Colin Powell made it sound like Iraq was at our doorstep, replete with nukes when, in fact, Iraq was never a threat to the United States. The administration also lied about Iraq's involvement in the 9-11 terrorist attacks. And just prior to the 2008 election, Condoleeza Rice responded to a Congressional investigation on torture by admitting that she led high-level discussions about the topic at the White House. Just a few days ago, a Senate report laid responsibility for America's torture policy at the feet of Donald Rumsfeld. If you feel we need just one more, let's go with the illegal wiretapping of American citizens. George Bush will insist that this was necessary to fight the war on terror, but he was in fact spying on us before the 9-11 terrorist attacks. If that's the case, and we now know it is, we can now unequivocally conclude that the surveillance was completely and totally unsuccessful. Why should it continue? Let there be no doubt about it, this is more than enough to get the impeachment ball rolling.

I have had people ask me why I want to see the country subjected to something like this now that the Bush administration is on its way out. I'll tell you why: Because if we don't, we send a message to the rest of the world that we do not take our freedoms, our Constitution and its principles very seriously. We pretty much tell other nations that we are not to be held to the same set of standards that we hold them to. We fail to let Barack Obama and those that follow him know that there's a limit to the powers of the presidency. Worst of all, George Bush wins and our nation loses. Again, we seem to have put on the rose-colored glasses and are just assuming that Barack Obama will go ahead and right all the wrongs. This is not necessarily so. Only two public servants got this one right and took a stand on impeachment, Congressman Dennis Kucinich (D-OH) and Congressman Robert Wexler (D-FL). Both have been tireless in their efforts to bring the Bush administration to justice, making them Republican targets for removal from office and the subject of ridicule by conservatives. I'm pleased to say that they both prevailed during the 2008 election season.

What better way to begin new leadership than by giving our Constitution, the cornerstone of our democracy, a good shot in the arm by holding the Bush administration accountable for its actions?