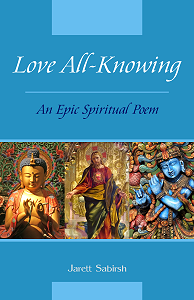 "thoroughly, at age twenty six my world inverted upside down
while coming to understand things beyond any noun
commonly held beliefs about what life is about
shattered, and not leaving a speck of doubt
nearly a whole decade has now passed before these eyes
since to the old me I had abruptly said goodbye
intense meditative surrender to a higher Will
an inadvertent piercing of the mystical veil
as the separation between the knower and known faded
everything became clear what was formerly shaded
the mind wholly turned in on itself as Self-Awareness
stripped of all conceptual thought in total bareness
untainted, spotless, Eternal Radiant Mind
exhaustively beyond words, it can't be defined
the futility of descriptions not lending a grain of justice
what appears is but a vain attempt to be clear and concise
when we were taught “God is within,” it was no joke
people reject it—the ordinary thought-mind acts as a cloak
be still and know that you are God, no?
no mere hollow phrase committed to scripture long ago
God is not a concept that can be thought of in a mental way
It is experienced in-depth when thought is cast away
Buddha eschewed the word “God” for a very simple reason
people conjure up false images that should not be believed in
Jesus grew up Jewish but transcended the religion
the Truth within lays to waste the scriptures of an eon
all the physical world has to offer pales in comparison
stupefying, Existence-Consciousness-Bliss initially stuns
“happiness is within” being the understatement of the century
clinging to the tiniest of notions prevents one’s entry
laboring in a retail shop while undergoing religious ecstasy
physical faculties all but ceased in this Divine intimacy
taking in physical phenomena by means of the ears
was nearly impossible even though face-to-face with a cashier
the material world eclipsed by a formless intangible Beatitude
behind the gross visible universe the Silent Mind preludes
exquisite rock-solid Infinite Love as my true nature
far surpassing human sensory experience while ineffably pure
absolute completion and utter finality just as Lao Tzu
overcome yourself and there's nothing left to do
inner permission arose to leave the body and world
either surrendered also, or turned down—away it whirled
if the option had been chosen it would have wrought
a body lying dead in a grocery store parking lot
the autopsy would've revealed nothing despite picking apart
with the exception of perhaps an overworked heart
with a friend later that evening, walking down the mall
experiencing indescribable bliss and oneness with all
everyone and everything a fluid living sea
Universal Consciousness as both you and me
being in rapturous love with all life and every person
but this wasn't maintained and things were about to worsen
ego crept back in believing it was Enlightened
it turns out consciousness only temporarily heightened
Oneness experienced once renders all else in the dust
returning to it again, for good, becomes life’s must
one's personal life right then is more or less done
context shifts as love extends to all humanity under the sun"

The full epic sized poem is currently being offered as a free PDF download!