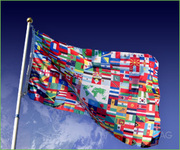 A place for peolpe of all nationalities, faiths and cultures to post local and international events, messages and videos for peace.

Origin of The World Flag

The World as we now know it is becoming increasingly interconnected. “On the International Scene, it’s a whole new deal out there. Global Economic Health or lack of it is of transcending consequence.” Politically, Economically, Environmentally – national issues have become Global issues. “Does any one nation have the right to cut down a large tropical forest, thus deleteriously affecting the earth’s atmosphere – to poorly design nuclear power stations that could accidentally spread radioactivity beyond it’s borders?” Questions much like these are becoming more and more at the forefront of International concern and the solutions therein call for Unity – in both Environment and Innovative Design; Anticipation and Application.

This transition into a “Globally – Concerned” World gnaws at the – “outmoded 19th Century Pre-nuclear notion of National Security.” If we are to move toward and embrace this change it must be done quite consciously. Whereas other transformations mankind has passed through have been accomplished inadvertently; moving from the Industrial age into the age of Cybernetics must be accomplished through a much heightened Global Awareness.

Throughout history man has evolved controlling direction by eliminating resistance. We are at a very critical juncture in this process. Man has created – perhaps paradoxically – the “Human-Gap”; a dichotomy between the growing complexity of our own making and a lagging capacity of dealing with such advances. Examples of this have been quite widespread globally; the environment pleading for relief from human exploit along with people(s) of oppressed nations crying out for freedom, democracy. Solutions seem to lack inspiration due to reactionary process and bureaucratic entanglement.
A move must be made away from our crisis – management attitude – globally – toward conscious anticipatory innovation. “Development is programmable; Discovery is not.” Ephemeralization – the acceleration of doing more with less – will and must become in-grained through Global-Awareness and Cooperative International participation. In promoting this Global consciousness; this Design Initiative must focus on the future, on new life, on children – the Hope of the Future. Therein all others will consciously or subconsciously benefit. Since children acquire 98% of both (+) positive and (-) negative influence by age 13, their environment and exposure to stimuli becomes essential from the start. As we have witnesses – especially as of late in China – universal attempts to reform and/or restrain other humans by political actions, laws, codes become self-defeating. Therefore Reform the Environment, not man.

As always talk is cheap, innovative anticipatory action rare. The need to heighten our “Conscious-Global-Awareness” is now more than ever essential. The need for Global Participation in this “shared fate” environment is key. Symbols and Images have always been environmental catalysts. Perhaps now more than ever images all but entirely control what we as humans both consciously and subconsciously perceive to be of any intrinsic value. As inspiration towards conscious change; away from a globally exclusive “National Security” mentality to a more unifying Global Awareness – there must be a symbol, an incredibly powerful VIBRANT IMAGE of ONE-NESS. It must saturate our environment as a symbol of shared consciousness, of Unity, of PEACE, of Life. Each and every time this symbol is seen it shall be a sign of Global Innovation – Anticipatory Participation.

In its use this symbol, this image has literally hundreds if not thousands of design applications transcending many realms of possibilities. People of the WORLD will know that each and every time this image is seen – in whatever application – monies from such endorsement will directly benefit Global Innovation in support of Cutting-Edge Anticipatory International Activity. A non-profit foundation will accrue and disperse funds after bi-yearly, quarterly or possibly monthly consortiums consisting of inspired individuals of all ages and all walks of life.

This organization must not be a one time project but an ongoing shared interaction as a catalyst for change and future Anticipatory Innovation for the collective syntropic well being of all life. If this simple yet intrinsically complex mission is to be accomplished, it must gain support and exposure from individuals and organizations of many different arenas’ internationally.

In pursuit of Design Innovation, Environmental Reform and Global Awareness – I’ve created such a SYMBOL – and wish to share it with all who are READY…

I present – The World Flag ©
www.theworldflag.org

This group does not have any discussions yet.

You need to be a member of The World Flag to add comments!

Comment by professor angelicus on January 19, 2009 at 10:35am
John
I too saw Lemphers-Fenton insulting, self-centered comment! Your flag waves!
Her flag is rolled up in her ego!
It's unfortunate but some people go around bursting peoples' bubbles and
take up more space than God allotted them!

Comment by The World Flag on January 19, 2009 at 5:02am
The response above was to a comment that was deleted by the poster Linda Lemphers-Fenton .Linda has created a flag called Unaminity. The post was saying that The World Flag is not all inclusive but the Unaminity flag is. I find it sad that certain people like Linda don't understand what The World Flag project is all about.

Comment by The World Flag on January 18, 2009 at 8:50pm
Linda~ I wish you the best of luck with your flag. There are lots of flags around the world that people have created and they are all wonderful. This paticular flag was created by my brother Paul in 1988 after he was almost killed in a bicycle accident. The World Flag is not about a copy right or exclusion. If these are your thoughts about The World Flag and creating peace then I am confused and bewildered. This is not me against you for the sake of a pice of cloth it is about us. Thanks for bringing the "Unamity" to my attention. I am a bit confused by the way you are using your words to share something you have created by using words like I have already created and have a copy right on a flag that stands for everyone" sounds like you are trying to discount the last 20 years of work and sacrifice that has been put into a labor of love and a quest that is trying to help bring the world together.

Comment by Deb Chamberlin on January 3, 2009 at 11:23pm
Our teen group, the Changing Our World (COW) Project, just made a short video performing an original spoken word, for President-Elect Barack Obama...leading into our music video for "We Can Change Our World" - this is being considered by a big local South Jersey Newspaper, the Courier-Post, for their video album being presented to Obama... (cross your fingers!)... the WORLD FLAG is featured in the video! check it out in mypeace.tv videos or at
http://www.youtube.com/watch?v=x8qjjr3SLmw
**In the Bottom Corner under the Video Player, click on "watch in HD" for better quality high definition! 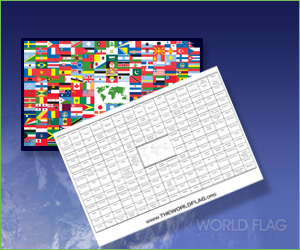 Comment by Heli Aarniranta on January 2, 2009 at 4:02pm
Nice t be here.
Greetings from Finland Comment by The World Flag on January 2, 2009 at 2:18pm
Seeking World Flag Ambassadors


The World Flag is currently expanding its distribution to every corner of the earth. If you or someone you know is interested in being an Ambassador Sales Representative send us a quick note with your contact info to john@theworldflag.org and we will set up a time to get you started. The World we live in is changing fast. Together we can foster positive change working as an international community to maintain our local vitality. Peace and education are reflections of how we treat each other. Join our International Ambassadors and help to change the world. Please forward this on to your friends and family. www.theworldflag.org